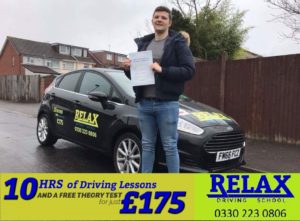 Congratulations to Ed Griffith who passed his driving test on the 12th March 2018! He passed his driving test at the Brislington Driving Test Centre! His driving instructor was Andy! Andy said that unusually, the traffic was very light and they arrived over 20 minutes early! This then gave Andy and Ed time to practice parking and the Show me/Tell me questions. The manoeuvre selected by the examiner was the reverse bay park, something which Andy later found out Ed was hoping not to get, but his concerns were unfounded. Ed returned home where his first take was to insure his new car which he purchased the day before his driving test! Everyone at Relax Driving School would like to wish him all the very best in the future with his driving! WELL DONE!

Show Me, Tell Me

📢📢 ANOTHER TEST PASS! 📢📢 🎉🎉 Congratulations to Sam Maslin who passed his test with Vince yesterday at Brislington test centre! Having been recommended by a previous pupil, Sam came to Vince from another driving Read more…