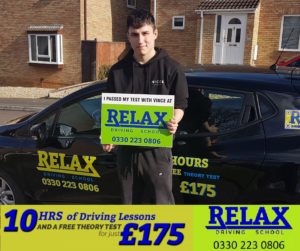 Vince said that the Examiner remarked that it was a great driver overall and despite the one reversing exercise that Alex doesn’t like, he manged to pull it off without any faults!

Vince said that Alex has been a pleasure to teach who has always been bright and cheerful!

Everyone at Relax Driving School would like to wish him all the very best in the future with his driving! WELL DONE! 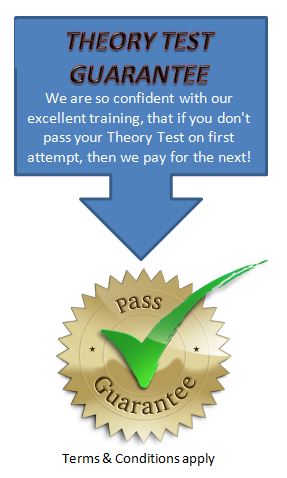 Relax driving school and more importantly Vince are very patient, concise and relaxed instructor (no pun intended). Made my driving lessons enjoyable and helped develop me into a competent driver. Couldn’t think of a better place to go and I’m proud to have passed my test throughout this school.

I think it’s fair to say I was an extremely nervous driver when I first started, but Vince helped me to overcome my nerves & stay relaxed & at ease during all my lessons.

Vince booked both my theory and practical test for me and was ever so helpful if I ever had any questions. He provided me with lots of theory questions online & supported me throughout the whole process.

I am so appreciative for everything that Vince did for me, and I couldn’t of done any of it without him. I therefore would highly recommend him as a driving instructor.

Awesome teaching by Vince top bloke. Patient and a calm demeanour put me at ease straight away. Can’t reccomend enough. Thanks and will be passing your details on to anyone in need of lessons.

Thanks so much Vince

I passed my driving test today first time and I really wouldn’t of been able to do it without the help of Vince! He’s always been so patient, kind, reliable and he always put me at ease! Thanks so much Vince I will be recommending you highly to all my friends and family in the future!

Vince was my instructor, he was brilliant, he was patient and most of all a laugh to be with in the car

patience of a saint

Vince was fantastic, had the patience of a saint and remained calm and supportive through stressful situations. He went that extra mile to ensure I was prepared for my theory ,remaining supportive when pressures were mounting. Thank you so much for everything!!

Thanks to Vin for helping me pass my driving test. Vin is a very patient instructor who supported and helped me. I have thoroughly enjoyed all my lessons with Vin. Couldn’t ask for a better instructor. I honestly can’t thank vin enough for all the help he’s provided 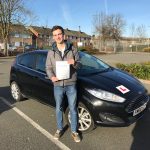 I enjoyed my time learning with relax driving school. My instructor was Andy Dunn, who did a great job of passing me first time! I would highly recommend Andy, I felt as though his advice and judgement were amazing throughout. Also he is very easy to get on with.

At last I passed 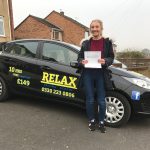 My driving instructor was Andy! A great instructor who is kind and very patient. I would recommend to anyone, especially to anyone who feels nervous about learning to drive as he puts you at ease and is so funny to chat with!
5* thanks Andy! 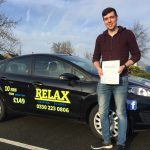 Andy Dunn was fantastic. He knew exactly what pace to take me. Got me trough it in 12 lessons. I can’t recommend him enough. Thanks very much Andy.

I had Andy for my instructor after having a different one previous to him and he was absolutely amazing! Very patient and clearly explains what to do which makes it so much easier to pick everything up! Would 100% recommend to anyone! 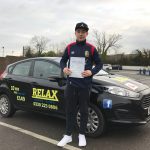 Brilliant teaching by Andy Dunn 100% encourage everyone to pick him as his teaching is a key part of me passing first time!!! 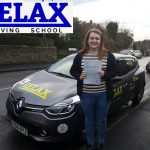 Vince is an amazing instructor and I couldn’t have had a better instructor to teach me to drive. He was understanding, patient and really helped to build my confidence when driving. He helped to make learning to drive so easy and stress free! I would definitely recommend him to anyone considering learning to drive.

Vince was a great instructor. Explained things very well and clearly. Was very flexible with lesson times. Had excellent theory practice resources. Thanks to him passed first time! Would highly recommend! 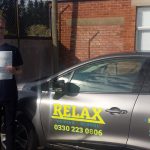 Passed with no faults. Vince is a great driving instructor and knows how to make you feel confident and safe on the road. I thought learning to drive would be a scary experience but with Relax Driving School it was made so easy, with mistakes being sorted within minutes and I would recommend this company to anyone. Thanks again for a great result, passed with NO FAULTS!! 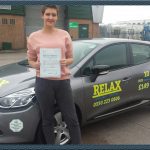 Thank you so much! To Vince. He helped me so much when I wasn’t very confident at the start. Vince teaches in a way so everyone can understand! I would highly recommend him to anyone! Best driving instructor I’ve had.

Just wanted to say a big ‘Thank You!’ to Vince. I passed my driving test over 5 years ago and had had little opportunity to drive since, so wanted to undertake a few refresher lessons. Over a couple of sessions I was able to practise my parking, build up my driving confidence and even tackled the M4! Many thanks again for your help!

Vince is a great instructor – very patient and supportive. I passed my test first time after only 8 weeks of lessons through the Summer holidays. Thanks Vince! 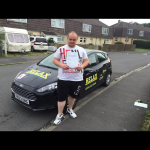 Andy Dunn is an amazing instructor, top marks to him, he got me through my test today, was always a couple of minutes early showing up for lessons and didn’t overly worry about the time whilst out driving. We had a good laugh together, and got on quite well! Very chilled out, just prompts or suggests things to tweak your driving instead of drilling instructions into you, he also makes you feel good about your driving and is never negative! Would definitely recommend him to anyone taking lessons! 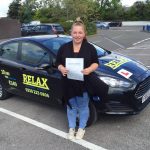 I had Andy teach me although I was never confident in myself and thought I’d never pass, I am happy to say I passed today on the first go thank you Andy for being my confidence and helping me to the end 🙂 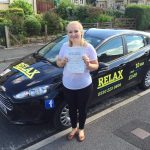 Had Andy teaching me to drive, he has the patience of a saint and would highly recommend him for anyone who feels nervous or unsure on the road. Always reassuring and telling you what you did right but would always go through any issues so you knew how to correct them. Couldn’t have asked for a better or more reassuring instructor!! Thanks Andy!! 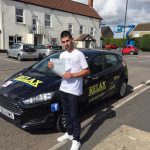 I passed my test over 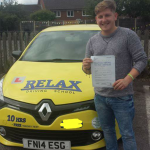 I passed my test over a year ago and i dnt think i could of without vin miner in instructor, was amzing a heloed me absolutely everything to get me over the line! Genius! 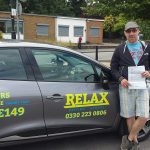 Thanx, never expected to pass first time, will be back for some motorway lessons soon

Vince is an amazing instructor! 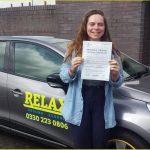 I passed my driving test first time with an amazing instructor, Vince! I could not of passed without him or his constant help and time he gave me !! Relax driving school gets results and are a friendly company, definitely worth having lessons with them !! 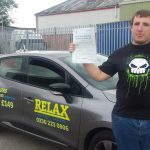 Thanks a lot Vince. Great driving instructor, helped me pass first time with 0 faults. Would 100% reccomend! 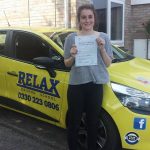 Helped me so much with my theory and really supportive with my test so glad I went with Vince. Was so helpful with everything and makes you feel so comfortable, thank you so much

After riding Motorcycles for nearly 30 years, i bit the bullet and decided to learn in a car for my full licence and saw the RELAX yellow Clio, which i promptly booked with online i was very nervous, but Vince instantly calms any nerve problems, even after i made stupid mistakes, he never lost his cool (i would have ;o)) after a block introduction offer (recommended) i passed 1st try… im still in shock i think ? Great driving school , Great instructor (Vince) and did not cost as much as i expected in the end Great result !! Many Thanks to Vince Miner

Started with Vince and he was amazing got me from knowing nothing to passing my theory first time then moved to Andy due to work and he had the patience of a saint, was a lovely guy to be in the car with and was a better laugh than most of my mates will be passing this driving school onto everyone I can

Vince was an excellent instructor to have teaching me, and was fun to drive with always open for conversations. I’d highly recommend him to anyone looking to learn.

When I started driving I was awful! I could barely drive in my lane on a straight road, but Vince helped me to steadily build up my confidence and now I have had a perfect test, and had a great time leaning along the way!

when i first started my driving lesson’s I was a bag a nerves no confindence what so ever Vince was so paitent an supportive didnt think I would ever be able to drive a car, Vince is the best instructor I’ve had and highly recomended! So easy to be around and talk to, very helpful with the theory side aswell! 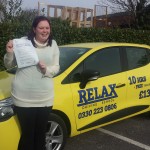 Cant believe I passed 1st time on test today with no faults. Thank you Vince for not giving up on me when I could not face a dual carriage way, now wonder what I was so worried about. You truly are an amazing instructor with so much patience I simply cant thank you enough. Hannah H. 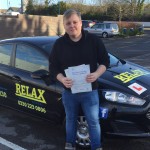 Andy is an amazing instructor, Calming personality and a great laugh when you need it most!! Helped me stop stressing myself out and pass my test! Some of his tips are so helpful I’ve passed them on to mates who have been driving for years. I couldn’t recommend him more! He will help you realise your full potential and make you a better driver than anyone at competing driving schools!

I’m so glad I choose to get back on the road after 9 years with Relaxed driving school, really good knowledgeable and great understanding my learning style, highly recommended, Nice car to drive too.

Vinny is the driving instructor to be with! Seriously awesome. Passed my test with no minors/faults !!!! He’s easy to get along with. nice to have a laugh and learn with.

Show Me, Tell Me 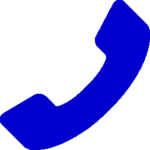